Whether you're looking for a mattress for a guest room or you just have a limited budget, both Allswell and Nectar are two of the top picks online. In this review we will dissect both beds to explain the reasons why one bed might be preferable to the other. The short story is that if you need a queen size mattress for under $500, Allswell wins, but if you can get closer to $800, Nectar is still in the running.

The way we structure most of our mattress comparisons is by going through mini reviews of each bed. Before we do that, however, we like to post an outline for our readers. So, here’s what you can expect from this review:

So, that’s the crux of what there is to compare with Nectar and Allswell. For the long story, there’s plenty to read in the sections below.

Some Background On Allswell And Nectar Sleep

Let’s kick it off with Allswell, which is the (slightly) newer brand. That said, Allswell is actually owned by a very familiar parent company. Maybe you’ve heard of it—Walmart. That’s right, one of the largest retailers in the country owns Allswell, and the brand is exploding. In fact, the Walmart concept of offering everyday low prices is pretty much the exact ethos by which Allswell lives. They offer three beds in a good-better-best model and all of them are a very nice value in our opinion.

Nectar might not be backed by a retail giant like Walmart, but the brand has seen near meteoric growth, and is ostensibly the most popular memory foam bed online at the moment. In fact, in Nectar’s second year in business the company sold over $200 million worth of bedding products. That’s no typo. Literally hundreds of millions of dollars in sales in year two. Clearly plenty of people like the Nectar Sleep mattress.

For the record, both brands offer free shipping, a risk free trial, free returns, and a 10+ year warranty.

The Allswell, The Luxe & The Supreme

When we mention Allswell, we’re typically referring to the base model mattress—otherwise known as “The Allswell.” Keep in mind, though, that Allswell also offers two other beds at higher price points. The Supreme is their most premium mattress that measures in at 14″ thick, while The Luxe is the middle ground between The Supreme and The Allswell. You can see all three beds on Allswell’s website.

So what’s the difference between the three Allswell beds? It’s all about feel, firmness, price, and thickness. For instance, The Allswell is about $375 for the queen, while The Supreme is closer to $1,000 (Luxe is in the middle).

Additionally, since Allswell Supreme is 14″ thick with a pillow top, it feels more like a memory foam mattress than does the original, base model Allswell mattress. Additionally, we would place The Supreme lower down the firmness scale than The Allswell since it simply has more in the comfort layers. For those of you who are interested, below is a short video comparing the Allswell Supreme against Nectar.

If you found the video above helpful, below is another video that you may want to watch. In this video, Jeff on our team compares the Allswell Luxe vs Nectar.

For the rest of this review, we will be looking at just the base model (i.e. The Allswell), and comparing it to Nectar in an effort to crown a winner for you.

Allswell Has Coils, Nectar Does Not

The biggest difference between Nectar and Allswell has to do with the support layers of the mattresses. For instance, Allswell has 6″ pocketed coils while Nectar uses dense polyurethane foam. Now, to be fair, there’s more than one way to skin a cat, and not everyone likes a mattress with coils, but for heavier individuals, innerspring mattresses are typically preferable to the all-foam varietal.

Because of the coils, Allswell has a nice amount of bounce and will also feel extremely durable. The downside with this construction is that since the bed has 6″ coils, there’s only a few inches left to dedicate to the comfort layers—and, therefore, the bed is definitely not “soft,” even though we happen to find it to be plenty comfortable.

We place the standard Allswell mattress in a very similar location as Nectar on our firmness scale. Both beds are between a medium and medium-firm, meaning they will work for multiple sleeping styles, but are not our favorite mattresses for side sleepers. To be clear, we expect that Allswell and Nectar will work for plenty of side sleepers, but neither is a plush or soft mattress.

The Allswell mattress feels like a firmer memory foam bed with coils, which is precisely what it is. Remember, however, that the memory foams are firmer at the beginning, but will soften as you sleep on the mattress. At the outset, you can tell that the bed has memory foam, but it won’t feel as familiar as Nectar. We consider Allswell to be more of a neutral-feeling mattress on day one even though the brand is transparent about the fact that they use memory foam.

It’s not very often that we find a bed that’s (substantially) cheaper than Nectar. Well, today’s the day, my friends because Allswell retails for ~$375 while Nectar is in the $800 range (after discount) for the queen size.

At $800, Nectar borders on “budget” tier, but it’s hard for anyone to touch Allswell prices. In fact, we have no idea how Allswell keeps prices so low. At around $375, Allswell is cheaper than just about every mattress we’ve ever reviewed, including certain mattresses on Amazon.

Let’s put it this way: college students should be cheering uproariously when they see the price of Allswell—it’s a darn good value. 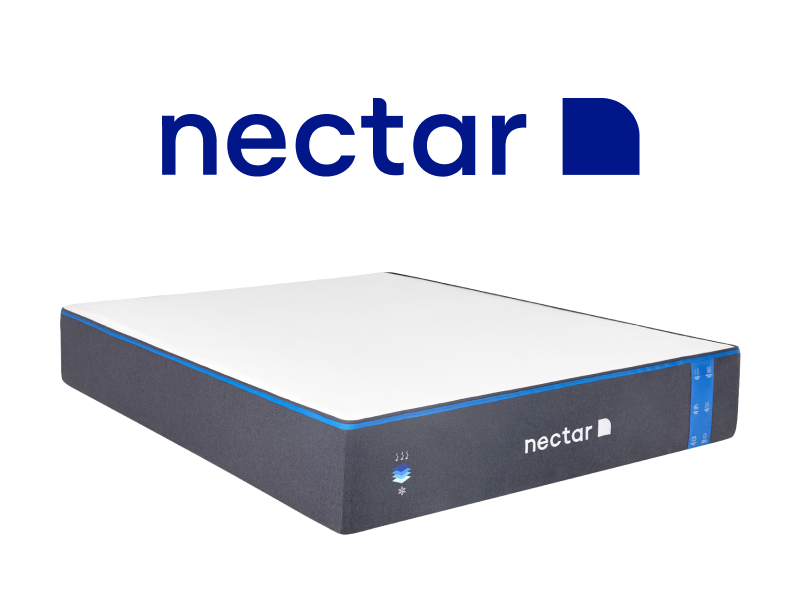 Plenty Of Memory Foam On Nectar

Nectar has become synonymous with memory foam. Just as Beautyrest Black has been branded as the luxury mattress in stores, Nectar has quickly become the memory foam mattress online. That’s not to say that it’s the best overall memory foam bed, but that Nectar is one of the first (if not the first) brands to come to mind when you say the phrase.

If you’ve read any of our other mattress reviews this might sound familiar, but here goes nothing. Nectar’s first layer is poly foam that’s especially dense so that it can support the entire mattress and the sleeper above. Nectar calls the poly foam its “Breathable Base Layer.”

The second layer is fairly normal strip of memory foam, followed by a thick layer of gel memory foam. These memory foam layers act as the main comfort layers for the bed and are what you will feel most when you lay on the mattress.

Given the several layers of memory foam, it comes as no surprise that Nectar has a thick memory foam feeling. It’s tremendously comfortable if you like memory foam, and should be plenty accomodating for a wide variety of sleepers. The only thing we should add is that Nectar isn’t really designed for heavy people, so if you’re over about 230 lbs, you should test out Allswell first, or look into another hybrid mattress such as, for example, DreamCloud.

While Allswell will offer pressure relief, you won’t get as much as with Nectar. As such, if you’re a strict side sleeper, Nectar is probably the better choice, although, it too isn’t especially soft. We do think both beds are really nice options for stomach and back sleepers.

Similar Firmness Ratings For Both Beds

As we mentioned above, Nectar and Allswell are both somewhere between a medium and medium-firm. That said, they feel quite different, so the firmness rating only goes so far in describing what the beds are like. With that said, here’s a look, graphically, at where Nectar is on our softness/firmness scale.

Nectar will feel firm at first, but memory foam is known to soften with two things: heat and pressure. In other words, as you lay on the bed it will start to soften. Nectar will also be softer in warmer rooms and firmer in colder ones.

I suppose there isn’t an outright winner for everyone in this comparison, but there are some larger items that would point you to one bed or the other.

For even more info on both beds we have posted individual reviews. If you’d like to see how Nectar and Allswell compare to other brands, make sure to check out our mattress comparisons page.