Allswell is fast becoming one of the best online mattress brands, while Puffy has been a household name for years. In this comparison we focus on the flagship mattress from both companies. Our goal is to help you find which mattress of the two is right for you. Perhaps you'll prefer the Allswell Hybrid because of its coils or the soft foam feel of Puffy.

While Allswell and Puffy don’t have a whole heck of a lot in common, here’s a quick list of the policy items associated with both mattresses:

Aside from that, you do get a warranty with Puffy and Allswell. For instance, Puffy comes with a lifetime warranty, while Allswell has a standard 10-year warranty. For more information on the beds, check out the sections below.

Why You Should Get Allswell — We have no shortage of positive comments about “The Allswell” or the brand at large. In this section we will discuss why Allswell might be preferable for you over Puffy.

Allswell Is A Budget Mattress — We consider both of these beds to be affordable, however, Allswell is notably cheaper than Puffy. If your budget is around $500, Allswell is the clear winner.

We often say that price should be a factor when you’re mattress shopping, but it shouldn’t be the factor. That point is especially true with the Allswell vs Puffy debate. As much as we like “The Allswell” and think it’s a tremendous value mattress, you need to make sure it’s what you want in terms of feel and firmness before you take the plunge.

Even so, Allswell is a seriously affordable bed with an MSRP of around $400 for the queen size bed. As if that wasn’t enough, Allswell Home isn’t opposed to offering discounts and sales. You can visit Allswell’s website for their current discounts if there are any. Usually during major holidays you’ll see some sort of sale.

As for Puffy, it’s a low-priced mattress as well—the queen has an MSRP of around $1,150. The brand is also no stranger to promotions. Almost always, Puffy is running a sale on their website in the range of around $300.

Firmness Ratings — Allswell is firmer than Puffy. We consider Puffy to be a medium, while Allswell is between a medium and medium-firm.

As a result, we would argue that Allswell is preferable for individuals that tend to favor their stomach or back while sleeping. Puffy is fine for all sleeping positions—including back and stomach—but Allswell is just firmer.

Hybrid Mattress — Puffy makes two mattresses, both of which are entirely foam. Allswell, on the other hand, makes three coil mattresses, which will be more optimal for heavy people.

It’s not even controversial to say that obese and large people should try a coil mattress first. The fact of the matter is if you’re over ~230 lbs, you will likely prefer Allswell over the long run. 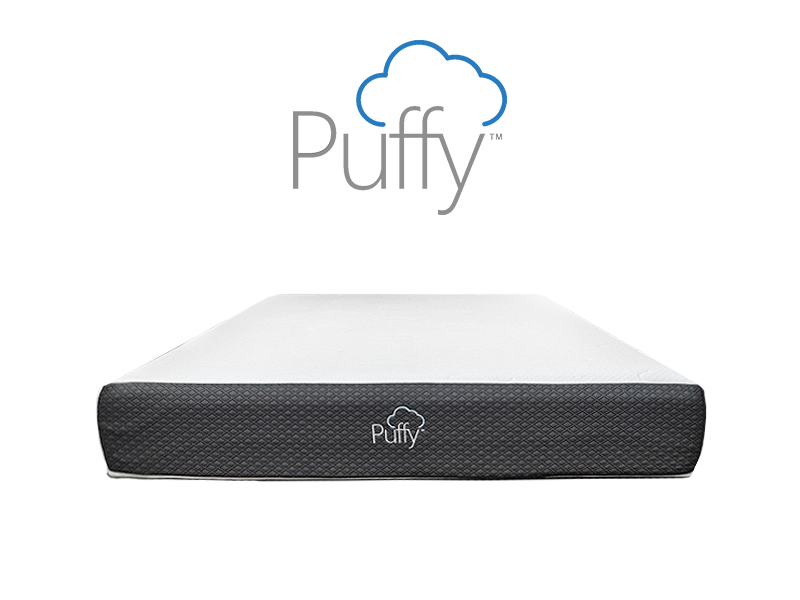 Why it’s Great
Puffy is one of the best known online mattresses. It has three layers of foam and a comfortable, accommodating “feel.”
Best for
Shoppers seeking a comfortable, affordable foam mattress
All types of sleepers, including back, stomach and side
Sleep Positions
Back, Side and Stomach
Product Details
Firmness
Medium
Type
Mixed Foam
Temp
Neutral
Free Shipping
and returns
Trial Period
101 Nights
Warranty
Lifetime
Made in
USA

Why Puffy Is The Better Mattress — As nice is the Allswell mattress is, there’s a large cohort of people that will simply prefer Puffy. Here are the major reasons why Puffy is a darn good mattress, and might be better for you than Allswell.

Easy Pick — In many of our best mattress lists we talk of Puffy as the “Easy Pick” or “Safe Pick.” Nothing could be more true. This is just a comfortable mattress that the overwhelming majority of people will find pleasant.

Puffy has what we call a soft foam feel, meaning it feels like a big slab of softer, neutral foam. It does have memory foam as its main comfort layer, however, there’s not an overtly memory foam feel.

If you took a group of 100 people, our bet would be that more people prefer the overall feel of Puffy than Allswell. It just offers a little more cushioning than the original Allswell mattress. Having said that, remember that both brands offer other beds with different firmness levels.

Puffy Has A Medium Firmness — While Allswell is a medium-firm, as we mentioned, Puffy is closer to a true medium. As a result, it’s a more natural fit for side sleepers, at least in comparison to Allswell.

Most of the mail order mattresses that we’ve reviewed have a medium firmness just like Puffy. It’s really popular because it allows the bed to work for all sleeping positions.

Washable Cover — Part of the reason that Puffy made our Best RV Mattress list is that it has a washable cover. Most beds, online or otherwise, do not have a machine-washable cover. This allows you to deep clean the mattress, making it a great fit for kids, teens, seniors, vacation property owners, and more.