In today's comparison we take a hard look at the Purple mattresses—including the original bed and New Purple 2/3/4—and Allswell. As you will soon read, everything boils down to whether you want a new-age, gel-like mattress or an inexpensive mattress that sells for under $500. That said, we make sure to mention everything from firmness to sleeping positions and pricing to policies.

There’s plenty to discuss with both Allswell and Purple, but before we do that, let’s run through a quick itinerary of the main points.

Those are the nuts and bolts of this review. For more info on each brand and their respective mattresses read the post below.

Introduction To Purple And Allswell

Ever since Purple launched its Kickstarter campaign in 2015, the company has exploded—Purple is worth nearly $1 billion now. They make a number of different beds, although, the brand is best known for its flagship 9.5″ mattress. Purple competes with everyone from Leesa and Casper to budget brands like Allswell and luxury brands like Beautyrest. But what makes Purple so special? It’s all about the company’s proprietary comfort grid called Hyper-Elastic Polymer, which is similar to a giant Dr. Scholl’s insole. All Purple beds feature the material, albeit in different thicknesses.

As for Allswell, the brand is owned by the largest employer in Bentonville, Arkansas—otherwise known as Walmart. That’s right, the retail giant Walmart owns Allswell Home and is committed to growing the brand. Once you know this, it makes a lot of sense as to how Allswell mattresses can be so unbelievably affordable. 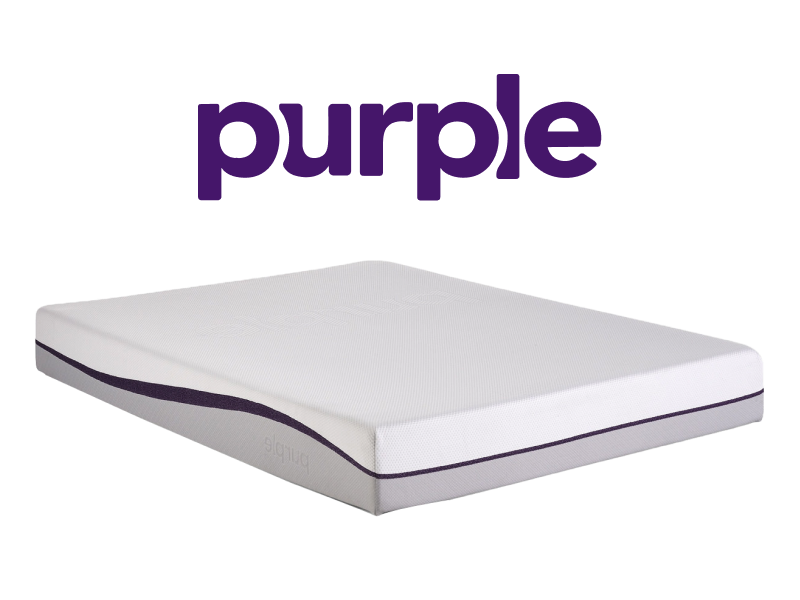 Why it’s Great
The Original Purple mattress is one of the most sought after beds online. It’s completely unique and is a great option for those that are interested in trying something new. It’s one of the only beds to feature Hyper-Elastic Polymer, a proprietary comfort material.
Best for
If you’re looking for a unique mattress with a different type of feel
All types of sleepers, including side, back and stomach
Sleep Positions
Back, Side and Stomach
Product Details
Firmness
Medium
Type
Unique
Temp
Breathable
Free Shipping
and returns
Trial Period
100 Nights
Warranty
10 Years
Made in
USA

There’s plenty to like about Purple mattresses, but the company’s proprietary “comfort grid” is really what gets people excited. You will see the comfort grid on all of their beds—it’s a squishy, stretchy, gel-like material that Purple calls “Hyper-Elastic Polymer.”

As you will see in the video above, Hyper-Elastic Polymer is unlike any foam on any other bed. In fact, it has more in common with Dr. Scholl’s insoles and Jansport backpacks (the ones with the squishy shoulder straps) than memory foam or poly foam. So, with that in mind, here’s what we like best about Hyper-Elastic Polymer:

It’s Soft and Firm — I know this sounds impossible, but somehow the material manages to be soft where you need it, but then also firm where you need it. For instance, when you lay on your side you get a nice amount of pressure relief on the curves of your body. As such, Purple beds tend to be viable options for individuals with neck and shoulder pain and also hip pain.

At the same time, however, if you flip to your stomach or back, you should experience plenty of support and also feel buoyant on top of the mattress—it’s an almost weightless type feeling.

It’s Great for Airflow — Given that the material is constructed to form a grid, there are hundreds of mini pockets of air. As a result, Purple beds do a fantastic, nearly unmatched job of circulating airflow and keeping sleepers at a neutral, comfortable sleeping temperature. Put more simply, Purple beds are great mattresses for hot sleepers.

It’s Quick to Respond — Most coil beds respond quickly to pressure being applied/removed. Purple beds are the same way, however, they are immediately responsive and leave zero body impressions when you rotate positions or get off of the mattress. Resultantly, Purple beds have no resistance for combination sleepers that want to sleep in multiple positions throughout the night. Interestingly, Purple says Hyper-Elastic Polymer can stretch up to about 15x its resting state. Needless to say, foams can’t do this.

Four Purple Beds To Choose From

Similar to Allswell, Purple is a brand, not a bed, even though the legacy mattress was just called “Purple Mattress.” Technically, now they make the “Original Purple” and the “New Purple.” Below is a look at the Original Purple mattress. It is 9.25″ thick with two foam layers and a 2″ comfort layer of Hyper-Elastic Polymer.

The new models replace the foam support core with pocketed coils. The reason that Purple created the new mattresses was to offer a bed with more support, especially for heavy folks. Beds with coils also tend to last longer than their all-foam counterparts.

Also, just for reference, Purple recently changed the name of their hybrid mattresses. These three beds used to be called the New Purple 2, New Purple 3 and New Purple 4.

When someone asks about the Allswell mattress, they are most likely thinking of the base model, which is called “The Allswell.” It’s the most popular mattress from the brand, and the value it offers is darn near incomprehensible (in a good way). But it’s not the only mattress that Allswell offers. They also sell “The Luxe” and “The Supreme,” which complete their good-better-best model.

For this review, we will primarily discuss the The Allswell (again, it’s the most popular model), however, here’s a quick breakdown of all three beds.

If you can afford The Luxe, it’s a wonderful mattress—same goes for The Supreme—but most people we talk to are interested in The Allswell simply because the price point is so low and yet the value and overall quality of the product is so high. You can learn more about and check the price of all three beds on AllswellHome.com.

The easiest way to describe Allswell is by telling you what it is: a spring mattress with memory foam on top. That’s exactly what it feels like, and we think it’s quite comfortable. As compared to Purple, Allswell has a much more familiar feel.

The memory foam isn’t overwhelming, but you can tell that it’s there. Interestingly enough, the bed feels more neutral than anything because it skews right (i.e. firm) on the firmness scale.

We think the firmness rating is pretty much spot on with Allswell since you’d rather have a bed start too firm than too soft; all these beds will get softer as you use them.

Now, to get a better understanding of the bed’s firmness level, perhaps the easiest thing to do is look inside the mattress. It has a fairly simple construction, but it’s certainly effective since plenty of mattresses have the same general design. Allswell starts with 6″ pocketed coils, which differ from traditional innersprings in the sense that they are individual springs, not one big metal unit. You will see pocketed coils on the New Purple mattresses, though, the coils are a bit taller at around 7.5″ give or take.

As you can see in our annotated image above, Allswell has a transitional foam layer on top of the coils. This is common to see on most coil beds since the layer helps to prevent sleepers from feeling the springs beneath. Additionally, it adds to the cushion the mattress provides.

The top layer of Allswell is a quilted cover that contains gel memory foam. You’ll notice that the bed doesn’t have multiple thick comfort layers. Clearly, this is by design, but it also explains why Allswell is firmer than something like Puffy or Casper.

Acceptable For All Sleeping Positions

We already went over firmness, but we want to add to that by discussing approved sleeping positions for Allswell. We consider Allswell best for back, stomach, and combination sleepers, as well as certain side sleepers. This is all very subjective, but in general side sleepers prefer soft mattresses, which The Allswell is not. That said, if you’re a side sleeper and want a bed that leans firmer, Allswell is just that.

Now, keep in mind that The Luxe—while a little more expensive than The Allswell—and adds more in the comfort layer department. As such, if you want a bed that retails for less than Purple, but is closer to a true medium on our firmness scale, the Luxe is a solid pick.

Another thing that we should add is that switching sleeping positions on Allswell is a non-factor (i.e. it’s effortless). The bed is responsive (not as much as Purple) and pops back into shape quite quickly despite having memory foam in the cover.

A firmer, responsive bed is also typically a good option for warmer sleepers since you will remain more on top of the bed and the foams do not trap as much heat. This isn’t to say that Allswell rivals Purple in the temperature regulation department. It’s just something we wanted to add since Allswell checks a heck of a lot of boxes for a budget mattress.

We’ve danced around prices for long enough in this review. Given that Walmart owns Allswell, they’ve insisted on keeping prices low—very low. As an example, the queen size Allswell mattress (base model) is under $400 before discounts. For comparison, the original Purple bed (their most affordable) is nearly $1,100 for the same size.

Now, this is a little unfair to our other compadre since Purple beds are a nice value as well given how unique they are. We simply wanted to point out that if you’re looking for a mattress for a college apartment, Allswell is your winner.

If you’ve read any of our other mattress comparisons, you know that we are not going to pick an outright winner. I know you might not like that, but the fact of the matter is that mattresses are subjective and there isn’t a “best mattress for everyone.” As such, here are the main points to ponder when looking at these two brands.

Beyond those main points, it’s really all about knowing yourself and trying to make the best educated decision. You can always email us if you are really stuck and have a burning question about a mattress.

The Supreme vs Purple – Video Review

The vast majority of this review focused on The Allswell, however, we also posted a video about how The Supreme compares to Purple. Here’s a look at that.