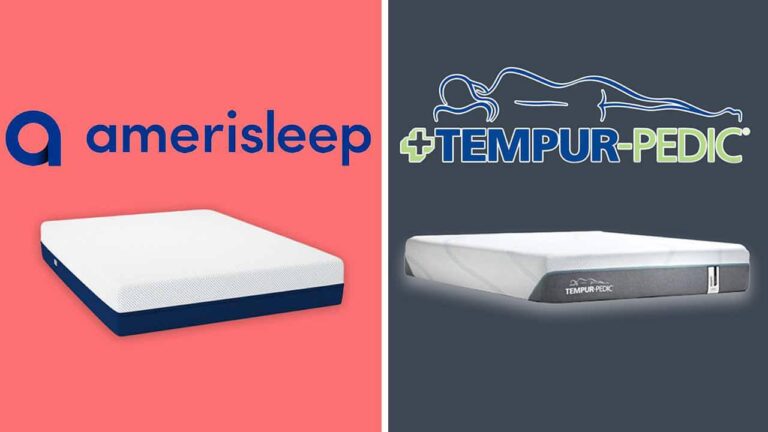 You can only get one memory foam mattress, so should it be from Amerisleep or TempurPedic?

In this review we breakdown the merits of each brand and discuss why you would get Amerisleep over TempurPedic, and vice versa. Both brands make some of the best memory foam mattresses that consumers can find in-store and online. We make sure to discuss the differences in feel, firmness, design, price, and much more. Our goal is to help you select a winner in the TempurPedic vs Amerisleep debate.

These are both memory foam mattress brands, so naturally they have a lot in common. Before we discuss the big reasons to purchase one bed over the other, we want to focus on a few things that you will get regardless of whether you shop with Amerisleep or Tempur-Pedic.

Commonalities For TempurPedic And Amerisleep

Free Delivery — Tempurpedic offers white glove delivery by default, wheres Amerisleep typically ships their mattress in a box via FedEx or UPS. To you, the future owner, there’s not much of a difference between the shipping methods because neither will cost you a dime extra. Technically speaking, white glove delivery is a premium service when compared to FedEx shipping. With white glove delivery a regional distribution company will deliver the mattress and set it up for you. It takes longer to get to you, but eliminates the need for manual labor (however small) no your part.

Trial Period — Amerisleep and Tempurpedic have different return policies, but they both do have a trial period. Amerisleep grants you 100 nights and Tempurpedic, 90 nights. You get a chance to test the mattress in either case for approximately three months. This should be plenty of time for you to form a concrete opinion about your new mattress.

If you decide that you’d like to return the bed, Amerisleep offers 100% free returns. They typically just send a local charity from your area to pickup the mattress so you don’t have to worry about re-packaging or shipping it.

Firmness Levels — As we’ve mentioned, both companies are known for their memory foam. To the average consumer, Amerisleep and Tempurpedic will feel mostly the same, but if you try one mattress and then the other you will notice a difference. Keep in mind that both companies offer numerous firmness levels, ranging from soft to firm.

Why You Should Get An Amerisleep Mattress — There are a few major reasons why consumers should consider Amerisleep over Tempurpedic. We will detail each of these in the text below.

You can check for discounts and promotions on Amerisleep’s website. Usually they are running a promotion in the $100-$200 range for AS3.

TempurPedic’s most popular mattress, according to the company is the TEMPUR-ProAdapt. The ProAdapt is approximately $3,000 for the queen size mattress. That’s more than double the price of Amerisleep AS3. Occasionally, TempurPedic will offer discounts on their beds. You can check TempurPedic.com for their current offers.

Having said all of that, you should not base your mattress purchase purely on price. You really need to consider other things such as design, feel, and firmness. If all of that is the same to you, then you might want to break a tie with pricing, and in that case Amerisleep wins hands down.

Responsive Memory Foam — In contrast to a traditional dense memory foam that you’ll see on many TempurPedic mattresses, Amerisleep uses a responsive memory foam that is quite unique. You will still get plenty of pressure relief, but the foam will bounce back into shape more quickly than with a legacy memory foam. Here’s a look at the memory foam inside Amerisleep AS3:

You will see this responsive memory foam on all Amerisleep mattresses. It’s definitely one of our favorite memory foams on any bed.

Celliant Cover — Amerisleep is one of only a few brands that offer a mattress with a Celliant cover. It’s rare to see and we do consider it an upgrade. It’s not necessarily a cooling cover, but it is designed to help you achieve more restful sleep. We can’t confirm the claims made of Celliant, but we can say that certain of our team members swear by Celliant.

You can learn more about the Celliant cover on Amerisleep’s website. They have more information on its benefits and design.

In addition to containing a Celliant textile, the cover is removable and washable. As such, if you plan to deep clean your mattress, Amerisleep is a really good option for you. Of the 150+ beds we’ve reviewed, a very small minority have a washable cover. In most cases, the cover is removable, but you to hand wash any blemishes or stains.

Why You Will Prefer TempurPedic — For those of you that have an affinity for mega brands, TempurPedic is a no-brainer pick. They make several luxury mattresses that, if you’re willing to pay more for, are great beds. In this section we will argue the case for TempurPedic over Amerisleep.

Overview Of TempurPedic Models — In addition to offering numerous firmness options, TempurPedic makes five different mattress models within their TEMPUR line. Again, according to the brand the ProAdapt is the most popular, however, we are of the opinion that the Adapt is plenty good enough for the vast majority of consumers.

As you can see in the graphic above, TempurPedic also makes two cooling-specific mattresses named ProBreeze and LuxeBreeze. The overall feel of the mattresses does not change in practical terms from model to model.

All TempurPedic mattresses have a dense, viscose memory foam feel. You will get that familiar “stuck” feeling with

Cooling Cover — While Amerisleep beds have a Celliant cover, all of the beds in TempurPedic’s TEMPUR line have a cooling cover. The two “cooling” models, however, have an upgraded cooling cover that allegedly help you sleep up to 8° cooler.

The covers are cool-to-the-touch and do succeed in bringing down your body temperature. If you’re looking for a cooling memory foam mattress, the ProBreeze and LuxeBreeze are both hard to beat. That said, you will be paying out the wazoo for those cooling models, so you might just prefer the Adapt, ProAdapt, or LuxeAdapt instead.

The standard models still have a cooling cover, but it’s not quite as extreme as you’ll see on the upgraded cooling beds. They are still cool-to-the-touch and still do a good job of keeping you cooler at night as you sleep.

Hybrid Models — In addition to offering all-foam models, TempurPedic has several memory foam hybrid mattresses that make a lot more sense for heavy people than Amerisleep beds. The hybrid models have pocketed coils which tend to offer more support over the long run, and make TempurPedic more ideal if your weight scale shows more than about 230 lbs.

The Adapt, ProAdap, and ProBreeze and the only models that have a hybrid option. These beds will be listed as a “Medium” so they will not be overly plush or firm. They will, however, feel firmer for the first few seconds, but soften up as you sink into them.