We are supported by readers purchasing through our links. This page may contain products from our partners. Learn more 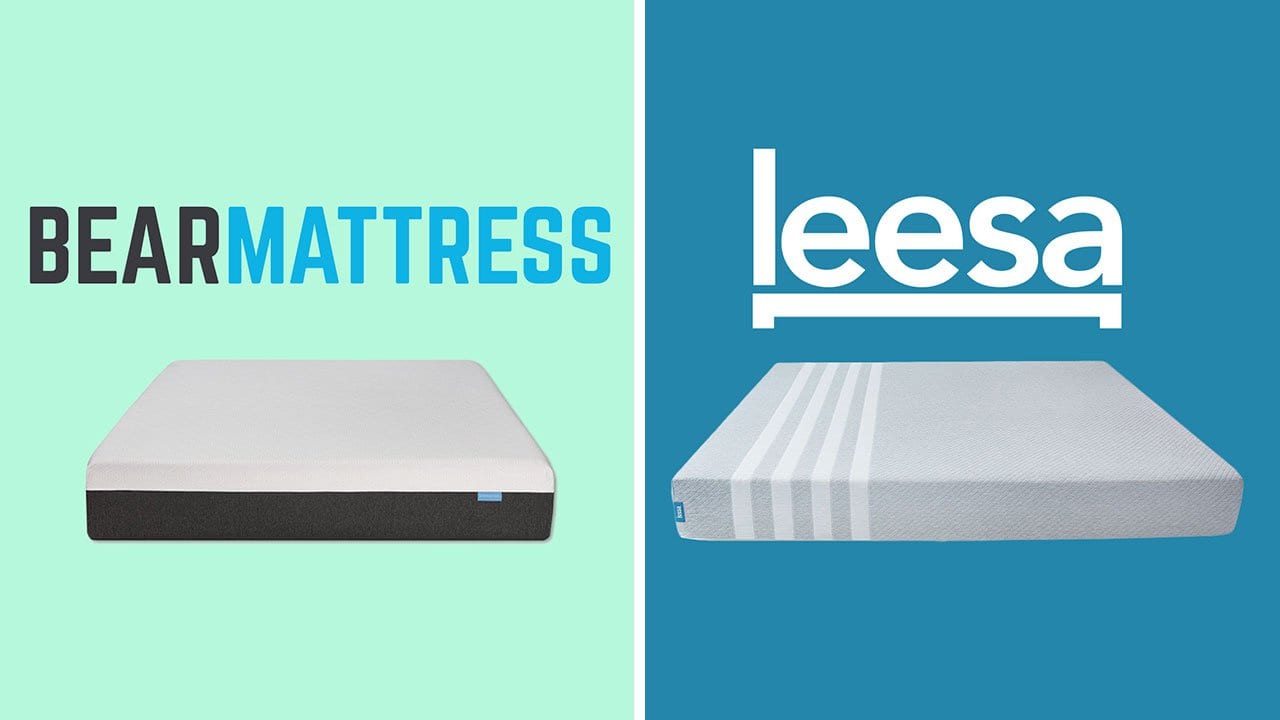 Both are made of foam, but we dig deeper in this Bear vs Leesa mattress review.

Last Updated: May 14, 2020
Bear and Leesa are both considered industry veterans in the bed-in-a-box space. As such, both of their flagship beds are often lumped into the same category. However, as you will find out below, there are plenty of differences between the Leesa and Bear bed-in-a-box mattresses.

If you like to cut right to the chase, here is a quick overview of the differences between these two online mattresses.

Those are the primary differences, but, as usual, there’s more to the story. Keep reading to learn more about Leesa and Bear.

In addition to the Original Bear mattress (the focus of today’s comparison), the company also offers the Bear Hybrid mattress. As the name implies, this model incorporates coils in addition to layers of foam. It’s more expensive than the original model, but it’s definitely the better option for heavy people (250+ lb) due to its construction. Enough about the hybrid model, though, let’s discuss some of the advantages that the Original Bear mattress has over the Leesa mattress.

Perhaps the biggest distinction that can be drawn between the two mattresses is feel. In short, if you like the feel of memory foam, then the Bear mattress is the more ideal option. The bed uses a slab of graphite-gel memory foam for its top layer, which sort of conforms and contours to your body as you lay down. It’s not like traditional memory foam, however, because you don’t get that deep viscous feel as you would on a TempurPedic for example.

Overall, we describe the bed as having a firmer memory foam feel. We think it comes in around a medium to medium-firm on the firmness scale. At the end of the day, it’s just not quite as firm of a memory foam feel compared to the likes of Cocoon Sealy or Nectar. All in all, though, it’s an extremely comfortable mattress. It’s one of those beds where you can’t help but let out an audible sigh of relief as you plop down on it after a long day at work.

As you will find out later in this comparison, the Leesa mattress uses a proprietary foam top layer and has more of a neutral-foam feel as a result.

In reality, though, the MSRP prices don’t mean much. Both companies regularly offer deals and promo codes. For example, Bear typically offers $100-$150 off their beds. You can check the green discount box on your screen to see what the current promotion is.

Leesa offers large discounts, as well. You can typically expect to receive a 10-15% discount on your mattress purchase. We’d recommend you check out our Leesa deals page to see what the current promotion is.

One feature that Bear likes to heavily promote with their flagship mattress is the special cover. To be specific, the cover incorporates Celliant, which is actually a FDA recognized wellness textile. According to the company’s website, Celliant technology is able to convert your body’s natural energy into infrared light, which in turn is supposed to enhance oxygen levels and improve sleep quality, health, and performance. Bear has plenty more info on their website about its Celliant cover.

To be clear, we’re not scientists here at The Slumber Yard so we can’t say with absolute certainty this mattress does what Bear claims, but it’s still nice to have if you don’t have to pay extra for it. So as long as you like the other characteristics of Bear too, we see the mattress as an excellent option for folks who live an active or healthy lifestyle. In fact, we even put Bear on our list of the Best Mattresses For Athletes.

Like Bear, Leesa offers a more premium mattress model, as well. This model is called Leesa Hybrid (previously Sapira) and it feels very similar to the Original Leesa (the focus of today’s comparison) all things considered, except it uses pocketed coils for its primary support structure. For more information on the mattress, make sure to check out our full Leesa Hybrid (Sapira) review.

If memory foam isn’t your cup of tea, then it’s time to perk up because the Leesa mattress does not have an overt memory foam feel. The bed does use a layer of memory foam, but it’s used as a secondary comfort layer. Instead, Leesa uses a proprietary foam, which they call LSA200 for the top layer. This layer gives the bed more of what we call a neutral-foam feel, meaning it doesn’t quite conform or contour to your body the same way memory foam does.

Overall, the top layer of foam is still soft and comfortable (like memory foam), but it’s just a little more neutral in terms of functionality. At the end of the day, it seems like the majority of people find the bed to be very accommodating. If you’re not entirely sure what type of feel you’re looking for, the Leesa mattress is a safe bet.

What Leesa And Bear Have In Common

Above we described some of the areas in which Bear and Leesa differ, but the two mattresses also share a few similarities.

It used to be that there was a major difference in firmness levels between Bear and Leesa, but now that’s fairly close. We’d rate Bear a little firmer than Leesa, but we think both will work for all sleeping positions. That said, if you’re a strict side sleeper, chances are you’ll prefer Leesa over Bear.

Given the all-foam constructions of each bed, we think both mattresses are most ideal for petite and medium sized individuals. Typically, hybrid and innerspring beds that contain coils are preferable for heavy people (250+ lb). Coils, in general, provide more support and last longer than the dense poly foams that all-foam mattresses (like Leesa and Bear) use for their foundations.

Given this, you can see why coils are preferred to support the pressure large folks exert on mattresses. If you fall into the heavy person category, you may want to check out our list of the Best Mattresses For Big Guys.

After testing each bed, we think both mattresses sleep temperature neutral. In other words, we don’t think either mattress will be the primary reason why you heat up or cool off throughout the night. Neither mattress incorporates special cooling textiles or anything like that to actively keep you cool. With that said, our testing team never complained of waking up drenched in sweat or anything like that either.

Ultimately, we think external factors, like what temperature you set your thermostat at, will have more of an affect on how warm or cool you sleep. If you’re an especially warm sleeper that is concerned with staying cool, you may want to check out our list of the Best Cooling Mattresses.

Both mattresses are quite responsive, meaning the top layers snap back into position quickly after pressure is released. We kind of expected this from the Leesa mattress given its proprietary foam top layer, but the Bear mattress was a bit of a surprise. Typically, memory foam is slow to respond, but we found the top layer on the Bear mattress to be fairly responsive. Here, take a look for yourself.

This means you won’t get any sort of that stuck-in-the-mud sensation with either bed, which is a good sign for combination sleepers who tend to rotate between positions frequently.

Last up, we think both mattresses will work just fine for couples. The beds perform well in regard to edge support and motion isolation, which are two important factors for couples to consider. Motion isolation refers to how well a bed deadens movement so you don’t feel your partner’s tossing and turning throughout the night. Edge support is important for couples who share a smaller size bed. Couples that fall into this category will want to find a bed with good edge support so both individuals have ample room to spread out comfortably. Luckily, Leesa and Bear get passing grades in both departments.

You made it to the end of the comparison. You deserve a big pat on the back. Thanks for sticking with us. Buying a new mattress is a big deal, so we understand if you’re not completely sure of which bed to go with. In our eyes, this comparison really comes down to the following decision points:

Price — If you’re on a tight budget, the Bear mattress is the cheaper option.

Feel — If you like the feel of memory foam, Bear is the way to go. If not, play it safe and go with Leesa.

Sleeper Type — If you spend the majority of the night on your back or stomach, both will work, but if you only sleep on your side, Leesa is probably the better option.

That’s it! Thanks for choosing The Slumber Yard. 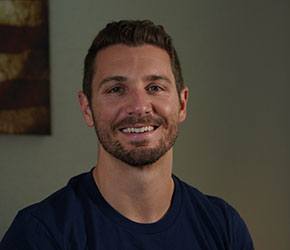 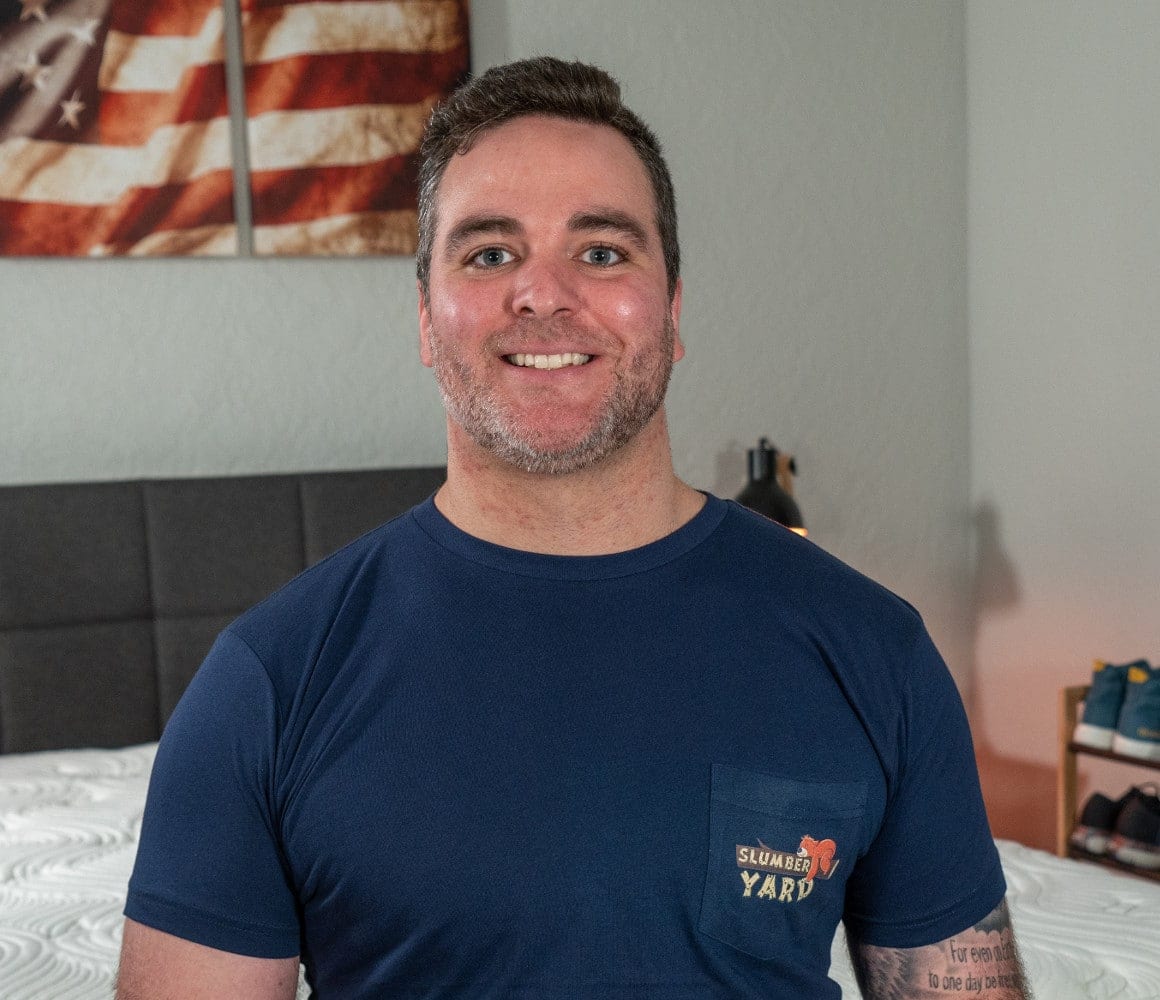 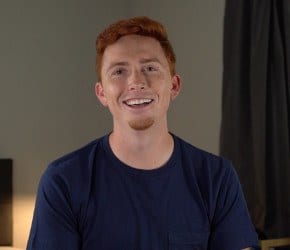