Bear and Casper are two of the most popular mattress-in-a-box brands on the internet and often get lumped into the same conversation when consumers are shopping online. However, there are several distinct differences you should be aware of before deciding between the two beds.

In today’s day and age, it seems like most consumers like to cut straight to the point, so to cater to that crowd, here are the primary differences between these two bed-in-a-box mattresses.

Those are just the four headline differences, though. It’s always a good idea to conduct more research rather than less when talking about a big purchase like a new bed. Keep reading to learn more about Bear and Casper. 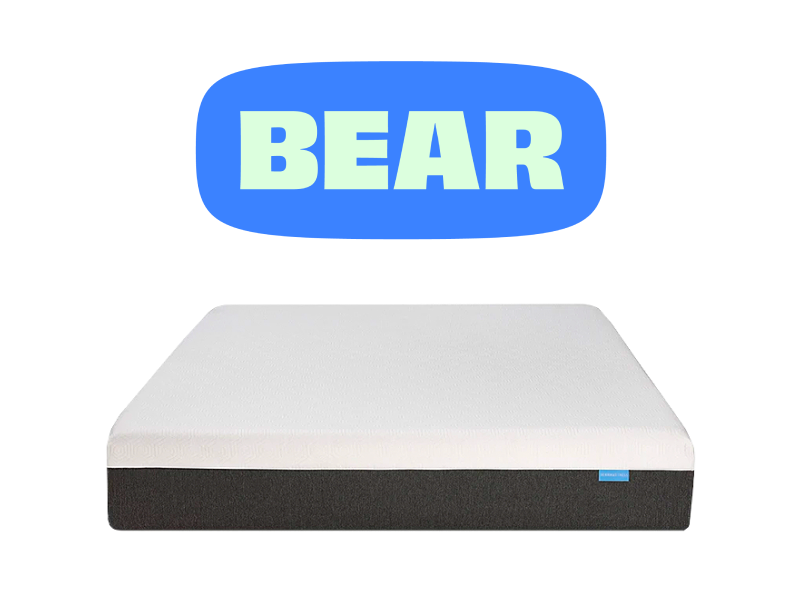 Why it’s Great
Bear Mattress is not only one of the most popular memory foam beds online, but also one of the most affordable at under $800 for the queen size.
Best for
Budget shoppers
People that like memory foam
Sleep Positions
Back, Side and Stomach
Product Details
Firmness
Medium
Type
Memory Foam
Temp
Neutral
Free Shipping
and returns
Trial Period
365 Nights
Warranty
Lifetime
Made in
USA

Before we begin, it’s important to note that Bear offers another model called the Bear Hybrid. As the name implies, this model incorporates coils in addition to layers of foam. We really like the hybrid model, but it’s quite a bit more expensive than the Original Bear mattress, which is the focus of this comparison.

One of the big differences between Bear and Casper comes down to feel. The Bear mattress uses a layer of gel memory foam for its top layer and as a result, the bed has a somewhat firm memory foam feel.

Previously, the Bear mattress was quite soft, but the company made some slight adjustments in mid 2019 and now it’s a bit firmer. Overall, the bed is quite comfortable. If you like the conforming sensation memory foam provides, you’ll most likely dig this bed. You can see the new bed on Bear’s website. We have also updated this post to reflect the changes.

The other nice thing about this mattress is that the memory foam top layer is surprisingly responsive. In other words, the top layer pops back to position decently quickly after pressure is released, which is unusual for memory foam beds. This means combo sleepers likely won’t feel like they are “stuck in the mud,” which tends to be the case with a lot of beds that use memory foam for their top layers.

As you will find out below, the Casper mattress has more of what we call a “neutral-foam” feel. I’d like to add that when talking about feel, there’s no winners or losers. Everybody has different preferences. Some people love the feel of memory foam and some people prefer a more neutral, generic foam feel like that of Casper. It really just depends on the sleeper.

More Ideal For Back And Stomach Sleepers

If you were to have asked us a few months back who Bear is best for, we would have replied “side sleepers, definitely.” With the latest changes, however, the bed sits on the firmer end of the spectrum as you can see in the graphic below.

As such, we consider Bear to be best for back and stomach sleepers, though, in most cases it will be just fine for combination and side sleepers. A petite side sleeper might find Bear to be a little firm at first, but the mattress will soften up over time. It’s just that in a head-to-head comparison with Casper, it is the firmer bed.

Both companies regularly offer discounts and coupon codes to make their beds even more affordable. Casper typically takes $50-$100 off and Bear usually reduces the price by around $150.

If Bear and Casper are a little out of your price range, don’t worry, we’ve got you covered. Be sure to check out our list of the Best Cheap Mattresses for more affordable options.

One noteworthy item about the Bear mattress is its special Celliant cover. For those of you who don’t know, Celliant is actually a FDA recognized wellness material. We’re not scientists here at the Slumber Yard, but Celliant technology supposedly is able to transform your body’s natural energy intro infrared light, which in turn boosts recovery and leads to a more restful night of sleep. Again, we can’t really comment on the accuracy of those statements, but it’s hard to argue with science.

Given what we’ve learned about Celliant and its benefits, we think the Bear mattress is an excellent choice for athletes or anyone that is committed to living an active lifestyle. We even put Bear on our list of the Best Mattresses For Athletes. With that being said, it probably shouldn’t be the major reason you choose to purchase this mattress, so make sure you like the other aspects of Bear too. 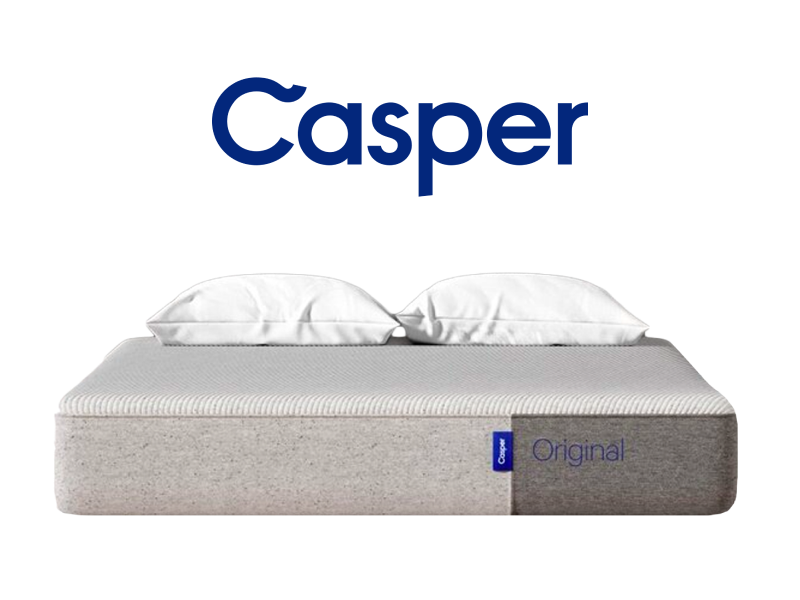 Why it’s Great
Casper Original is the mattress that started it all. If you just want a comfortable foam mattress, it’s hard to do better than Casper.
Best for
People that are looking for a comfortable, affordable mattress
Anyone that’s interested in a bed-in-a-box mattress
Sleep Positions
Back, Side and Stomach
Product Details
Firmness
Medium
Type
Soft Foam
Temp
Neutral
Free Shipping
and returns
Trial Period
100 Nights
Warranty
10 Years
Made in
USA

Like Bear, Casper offers other mattress models, as well. They offer an entry-level model called the Casper Element and a more premium option called the Casper Wave, which contains an advanced support system designed for proper alignment. As of early 2019, they also released two hybrid models called Casper Hybrid and Wave Hybrid, which are better options for heavy-set individuals. In this comparison, though, we are primarily talking about the flagship Casper mattress. Let’s get into it.

The Casper mattress does contain a layer of memory foam, but it’s actually used for secondary comfort and deep pressure relief. Instead, Casper uses a proprietary open-cell foam for the true comfort top layer. As such, the bed has more of a soft, neutral-foam feel compared to the Bear mattress. In other words, the top layer doesn’t really contour or hug your body the way memory foam does.

It’s still extremely soft and comfortable, but it’s just a slightly different feel than memory foam. Again, this isn’t necessarily a bad thing or a good thing. It really just depends on what you like. For what it’s worth, we’ve found that the majority of consumers out there find a neutral-foam feel to be very accommodating.

Like the top memory foam layer on the Bear mattress, we also found the top layers on the Casper mattress to be fairly responsive (probably more responsive). Again, this means you won’t ever feel like you’re stuck in the Casper mattress. It’s extremely easy and doesn’t require much effort to switch between positions.

Keep in mind, if you decide to go for one of Casper’s newer hybrid models, their construction will be pretty similar except they’ll have an additional layer containing coils.

Better For Strict Side Sleepers

Ultimately, we feel like the Bear mattress is just a little too firm if you’re under 150 lb and spend all night on your side. Typically, primary back and stomach sleepers prefer firmer mattresses that offer a greater amount of support. For that reason, we are a little more stringent with whom we recommend Bear.

Like Bear with its Celliant cover, the Casper mattress offers a unique feature, as well. This secondary layer of memory foam layer is what Casper calls its Zoned Support foam. This layer is unique because it’s actually split into three sections. The top and bottom sections are a bit softer to offer more pressure relief under your head, shoulders, and legs, and the middle section is slightly firmer to provide more support under your lower back and hips.

Casper claims this split design provides pressure relief and support where you need it most and helps to keep your spine in proper alignment. We’ve seen this type of design in other beds, but they’re typically more expensive. The Original Casper mattress is the only bed under $1,000 (queen size after-discount) that offers this type of design.

You made it! Thanks for sticking with us to the end. By now, hopefully the areas in which these two mattresses differ is crystal clear. If you’re still struggling with which bed to get, though, we completely understand. Buying a new mattress is a big deal. In our eyes, the decision between the two beds comes down to a few primary factors.

Feel — Do you like memory foam or do you want more of a neutral-foam feel? We can’t tell which one is better because it’s more of a personal preference decision. If memory foam was your answer, go Bear. If not, Casper is the ticket.

Price — If price is your chief concern, then Bear wins. Not only is Bear cheaper in terms of MSRP, but the company also seems to offer larger discounts than Casper.

Sleeping Position — If you sleep primarily on your side, we think Casper is more ideal. If you spend more time on your back or stomach, though, Bear is likely the winner.

We hope you found this comparison helpful. Thanks for choosing to spend your time with The Slumber Yard. We appreciate your support.