Brooklyn Bedding Signature could be the best value coil mattress given that is sells for under $1,000. Leesa, on the other hand, is a nice value in its own right. In this comparison review we discuss the legitimate reasons to buy Brooklyn Bedding over Leesa, and the other way around too.

Before we dive in, let’s do a brief overview of the main topics of today’s comparison.

To be quite honest, the video above is fairly comprehensive, so stopping here wouldn’t be a huge sin. If you want even more details, though, we’ve got about 2,000 words below that should add even more clarity to your decision.

Policies From Leesa And Brooklyn Bedding

As you might be aware, whenever you buy a bed online, free shipping is the bare minimum of what you should expect. In this case, both Brooklyn Bedding and Leesa offer free shipping, alongside an in-home trial period, free returns, and 10-year warranties. Leesa offers a 100-night test period, while Brooklyn Bedding gives you an extra 20 nights for a total of 120. Regardless, 100 nights and 120 nights are ample time to make your final call on the bed. And remember, if you don’t want them, call the company and get a full refund. 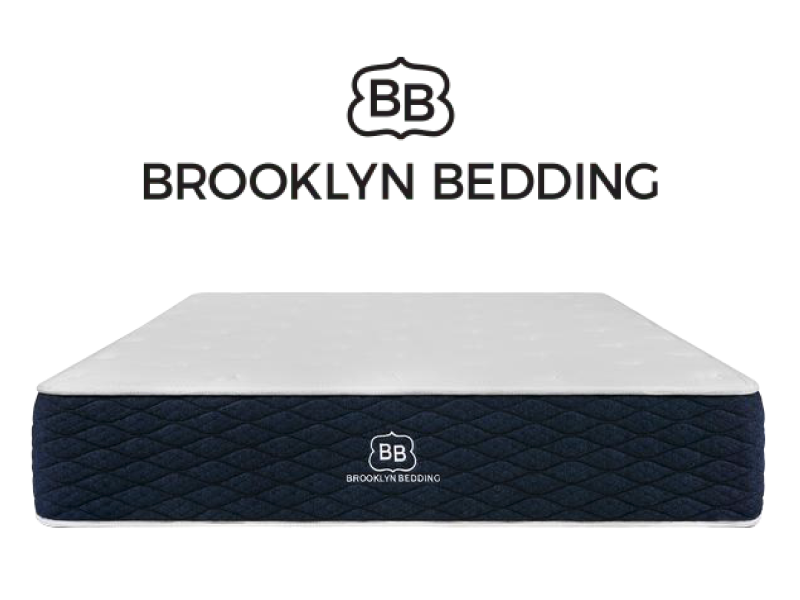 Why it’s Great
Brooklyn Bedding Signature is one of the best mattresses for the money online. It has pocketed coils, it’s made in the USA, comes in three firmness options, and sells for far less than you’d expect.
Best for
If you want a great mattress for the money
All body types
People that are looking for a coil mattress
Sleep Positions
Back, Side and Stomach
Product Details
Firmness
All
Type
Soft Foam
Temp
Neutral
Free Shipping
and returns
Trial Period
120 Nights
Warranty
10 Years
Made in
USA

The Inside Of Brooklyn Bedding Signature Hybrid Mattress

If you were to open up the Signature mattress you’d see 6″ pocketed coils edge to edge, which provide the bulk of the support for the mattress. What’s nice about the pocketed coils is that they’re only lightly woven together so they can act independently for the most part. So, for instance, if you apply more pressure on one side of the bed, you won’t necessarily be able to tell from the other side. This is the primary advanced of pocketed coils versus traditional innersprings. The Leesa Sapira Hybrid mattress also has 6″ coils, but the flagship foam mattress does not.

On top of the support coils are two foam layers. The first layer is “Energex Support Foam” and the second is “TitanFlex Comfort Foam.” On top you have a quilted, soft-to-touch cover that makes this thing look like a million bucks.

Because of the hybrid/innerspring mattress construction, we prefer heavier folks to start with the Brooklyn Signature Hybrid mattress over Leesa. In many cases, people weighing over 250 lb will wear down all-foam beds quicker than they would a coil bed. Remember, you can also look at the Leesa Sapira Hybrid mattress, but that does cost more.

Given that the bed has coils, you’d expect it to have a bouncy and responsive feel. That is indeed the case with Brooklyn Signature Hybrid mattress. And, since it doesn’t have any memory foam, it just feels like a big piece of soft and comfy foam on top of coils (which is pretty much what it is).

The coils do a great job of supporting you and the foams contour to the shape of your body. That said, it’s not like sleeping on the Tomorrow Sleep Hybrid since you won’t “melt” into the bed. It’s really easy to rotate between any sleeping position you want.

You Have Three Options With The Signature

Another differentiator for the Brooklyn Signature Hybrid mattress is that you have three firmness classes from which to choose: Soft, Medium, and Firm. As you might have expected, the Medium option is the most popular since it’s able to manage any sleeping position, though, it’s still on the softer end.

The Soft model is really just intended for petite side sleepers or anyone that needs a truly plush mattress. The Firm model isn’t too firm overall, but it would be a little too firm for most strict side sleepers. That said, if you’re fond of sleeping on your back or stomach, it’s our favorite of the bunch.

Both beds have an MSRP that’s close to $1,000 (queen size), but Brooklyn Bedding is more aggressive with their deals and coupons. We have our theories as to why that’s the case, but it probably just comes down to the fact that Brooklyn Bedding owns their manufacturing facility and can afford to make deeper cuts to prices.

Once you apply a coupon code, Brooklyn Signature tends to float around $800 for the queen size where as Leesa will be closer to $850-$900. Now, this does depend on time of year and the sales each brand is running, but on average Brooklyn Signature is more affordable. You can check current deals and offers on BrooklynBedding.com and Leesa.com just to see if they’re running something better or worse a the moment.

The Original Leesa mattress is fairly unassuming in that it’s made with three layers of foam. The first two layers are fairly standard—just poly foam and memory foam. The top layer is really the secret juice that makes the Leesa bed completely worth testing out.

In prior models, Leesa had a top layer called Avena foam, but in the past few years they’ve switched to a proprietary foam called LSA 200 that put a smile on our face the first time we tried it out.

LSA 200 was really the material that helps the Original Leesa mattress climb the ranks on many of our best mattress lists. It’s soft and fluffy with an airy quality to it. It actually reminds us a lot of the “Open Cell” foam that the Casper mattress features.

We tend to say that Leesa didn’t outthink the room with this new foam. They made it exactly what it needed to be, and nothing more. It’s soft, responsive, and breathable—that’s exactly what you want from the top layer of a mass-market online mattress.

Despite using memory foam, the Original Leesa mattress has a flat, neutral profile. It’s even more neutral than the Brooklyn Signature Hybrid mattress, we’d say. In fact, the Original Leesa mattress is such a safe pick because of the overall feel of the bed that we’d wager that the vast majority of people will be happy with the mattress. It might not satisfy everything you’re looking for, but we can’t imagine that you’ll complain with the feel and comfort.

It might be quite a bit more expensive than Leesa and Brooklyn Signature Hybrid mattresses, but we didn’t want to completely ignore the fact that Leesa has a hybrid mattress, too. It used to be called Sapira, however, they’ve recently switched the name to Leesa Hybrid.

In any case, you can think of the Leesa Hybrid as exactly what the name states—a hybrid version of Leesa. It has 6″ coils and a firmer overall profile, but it mostly feels like Leesa. It’s really comfortable and is best for stomach, back, and combination sleepers.

Besides having great edge support, we can’t think of many compelling reasons to spend up for Sapira over Brooklyn Signature, however. There’s no doubt that it’s a nice mattress, but it is about $500 more expensive. You can check the current price on Leesa.com, though.

Leesa Is Easier To Move

This might seem like a silly thing to bring up, but the Original Leesa mattress is the easier of the two mattresses to move because it’s lighter. Ordinarily, we wouldn’t bring this up in a review since it’s a smaller point, but we try to consider user intent when we post comparisons.

If you’re a young professional or college student, chances are you’ll be moving soon and regularly—you will prefer the lighter load with Leesa. Brooklyn is, however, one of the more manageable coil beds to move, so don’t let us scare you off entirely. We’d rather move five Brooklyn Signatures Hyrbid mattress than one New Purple 2/3/4 mattress.

Leesa Is Big On Donations

This also isn’t necessarily our favorite item to mention in a mattress review, but it might be worth knowing that Leesa is a certified b-corporation that donates a lot of mattresses to charities. To be more specific, they donate one bed for every ten they sell and they plant a tree for every bed they sell. We know Brooklyn Bedding does a lot for their community as well, but it seems like Leesa is trying to make this part of its brand.

Final Verdict On How Brooklyn Compares To Leesa

As always, it comes down to your personal preferences. We can see a legitimate case for both beds, but obviously you’re just starting with one, so here’s how it all shakes out:

At the end of the day, we like both beds, and we think they’re both safe options. It primarily boils down to whether would you prefer an all-foam or hybrid construction.