DreamCloud is a thick coil mattress and Purple offers something unseen before in the mattress industry. In today's review, we discuss why DreamCloud and Purple might be right for you. We cover topics like feel, firmness, acceptable sleeping positions and more.

Before we discuss all of the little details about how DreamCloud and Purple compare, let’s run through a quick overview of the contents of this post.

Those are the major highlights for now, but there’s a lot more you’ll want to consider before making a final purchase decision. Keep reading for more details.

With the exception of the Original Purple mattress, DreamCloud is the cheaper option. Comparing queen sizes, DreamCloud Premier retails for $1,400, DreamCloud’s queen bed has an MSRP of about $1,100, while the Purple Hybrid beds range from $1,600 to $3,000. That’s before applying a promo code, however.

DreamCloud frequently (nearly always) runs deals on their website that will bring the price down to about $1,200. Therefore, the more realistic price comparison is $1,400 for DreamCloud and, at minimum, $1,600 for Purple (based on queen sizes).

Purple isn’t all that fond of promoting cash discounts the way DreamCloud does. That said, frequently Purple will offer bundles and sales on their website to help incentivize purchases—particularly during major holidays.

We’re not really convinced that in this case that a price comparison is all that fair since the beds are nothing alike. If we were comparing two memory foam mattresses that you buy on Amazon, a price comparison would be lot more appropriate. In any case, at least you’re now aware of what the beds retail for.

A Look At DreamCloud’s Construction

DreamCloud Premier is one of the more unique memory foam beds in that it combines 8.5″ pocketed coils with various layers of memory foam and polyfoam in addition to a 2″ quilted Euro-top.

While DreamCloud technically is a memory foam mattress, you wouldn’t really know it given the bed has a quilted pillow top. For most people, it’s just going to feel like a traditional pillow top mattress, but with a hint of memory foam underneath.

The entry-level DreamCloud Mattress, on the other hand, is one inch thinner and has more of a memory foam feel than the Premier model.

Which Sleeping Positions Are Acceptable?

The DreamCloud Premier Mattress lands around a medium to medium-firm on our scale, which is just a tad firmer than the flagship DreamCloud Mattress.

As such, we think both beds comfortably accommodates sleepers in all positions. With that said, DreamCloud Premier is better for back and stomach sleepers and we think the standard DreamCloud would be more ideal for side and combo sleepers. 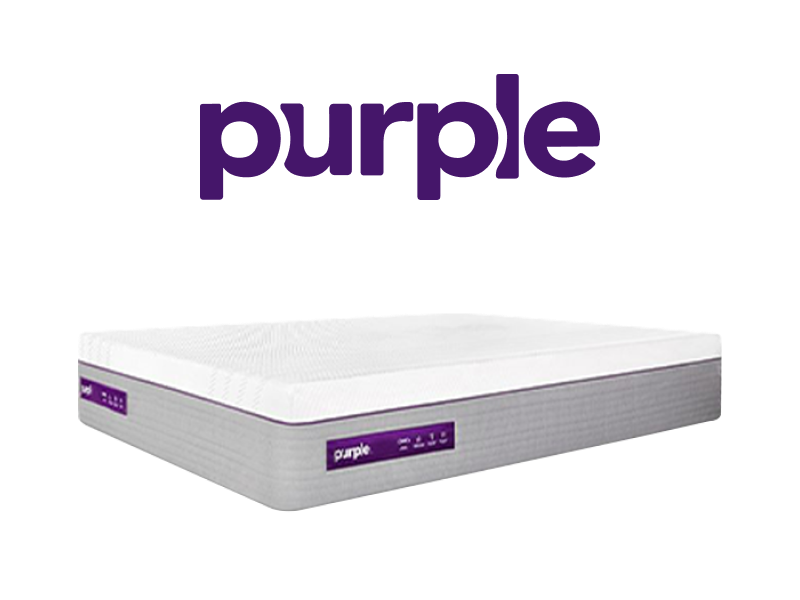 Why it’s Great
Purple Hybrid is a coil mattress that features a proprietary comfort layer called Hyper-Elastic Polymer. It’s a unique mattress thats comfortable and great for hot sleepers.
Best for
If you’re looking for a unique, responsive mattress with a different type of feel
All types of sleepers (particularly back and stomach)
Sleep Positions
Back, Side and Stomach
Product Details
Firmness
Medium
Type
Unique
Temp
Breathable
Free Shipping
and returns
Trial Period
100 Nights
Warranty
10 Years
Made in
USA

What’s So Special About Purple?

It’s all about the comfort layer. All Purple mattresses have a top layer of Hyper-Elastic Polymer which is a gel-like material that can apparently be stretched about 15x its resting state. You won’t find this on other mattresses either (aside from Intellibed), so it’s a big differentiator for Purple.

As you can tell, Hyper-Elastic Polymer is anything but ordinary. It’s basically an enormous, rectangular Dr. Scholl’s insole. I know that sounds odd—and it is—but it really makes Purple beds special.

That top layer is both firm and soft, at the same time. When you lay on your side, the pressure relief is immediately apparent under your hips and shoulders. When you lay on your back or stomach, you feel almost as if you’re weightless. It’s like a zero gravity situation that you simply cannot experience on a foam mattress.

How Are The Purple Beds Different?

Original Purple — The bed has a foam support core and 2″ of Hyper-Elastic Polymer. It also is the most affordable bed from the company. You can see the current pricing on Purple.com, but expect the queen to be about $1,000-$1,100.

Purple Hybrid — This is the firmest bed in their lineup, but it’s no where near the firmness level of DreamCloud. The Purple Hybrid has 2″ of Hyper-Elastic Polymer. It’s just fine for all sleeping positions, but back/stomach sleepers will like it the most. This particular model used to be called the New Purple 2.

Purple Hybrid Premier 3 — This is pretty much a flat medium on the firmness scale. It has 3″ of Hyper-Elastic Polymer and is suitable for all sleep styles. This bed used to be called the New Purple 3.

Purple Hybrid Premier 4 — The most expensive bed from the company, the Hybrid Premier 4 (formerly known as the New Purple 4) gives you an unmatched level of support and comfort. This is the model that makes you feel near weightless given that it has 4″ of Hyper-Elastic Polymer. As a warning, though, this bed is not cheap.

A Refuge For Hot Sleepers

While Purple doesn’t offer cooling mattresses per se, they do make beds with above-average amounts of airflow. As you can see in the video we placed in the first section, Hyper-Elastic Polymer by its design allows for hundreds of pockets of air, which work to keep your sleeping temperature neutral. And that’s an important point—you’re likely not going to be cold with a Purple bed, but you certainly won’t heat up like you did on memory foam beds from the early 2000s.

The material itself, Hyper-Elastic Polymer, also fends off body heat better than most foams. in other words, you aren’t going to find a situation where the top layer is trapping heat and further warming you up. It pretty much just remains at a neutral temperature.

Given the level of praise we’ve heaped on both of these brands, I’m sure you can tell that even we are having a hard time awarding a winner. With that in mind, here’s a quick run through of the major points again.

At the end of the day, the decision is all yours. Keep in mind you can always visit DreamCloud’s website and Purple.com to see their current deals. Perhaps that will help you make your mind up.

What To Expect: Buying Purple Or DreamCloud

There’s a few things you can expect with all of these beds that sell online. The first thing is free shipping—you won’t pay anything extra for the delivery of your new mattress. Interestingly enough, both Purple and DreamCloud ship rolled up inside a large bag, not a box.

They both have the white glove delivery option as well. It’s free with Purple if you opt for one of the Hybrid Premier models, but DreamCloud charges a modest fee. Regardless, the setup process is as simple as it possibly could be. All you have to do is remove the bed from the bag, cut open the shrink wrapping, and allow the bed to inflate. It takes five to tens minutes depending on if you have a friend there helping you.

Both companies also offer a trial period in which you can take your time to come to a conclusion about the bed. What’s nice is that these are risk-free trial periods, so there’s no pressure to keep your new mattress. Purple has the standard 100-night window and DreamCloud gives you an entire year. That wasn’t a typo. DreamCloud gives you a full 365 days to make your mind up about the bed.

If you decide you don’t want DreamCloud or Purple during those trial periods, you can just return them for free and get all of your money back. All that’s required of you is that you pick up the phone, call customer service, and request a refund. No need to take the mattress somewhere—the companies should send someone to your house to remove it for you.

Moving over to warranties, typically you’ll get a 10-year warranty with a bed that you purchase online. That is indeed the case with Purple, but DreamCloud has an “Everlong” warranty, which you can read about on the company’s website.

Get the kind of sleep you’ve only dreamed of with some help from our team of mattress experts. We personally test more than 175 of the best sleep solutions from over 60 leading brands on site, so you can be sure you’re getting unbiased reviews, fair comparisons and personalized recommendations.