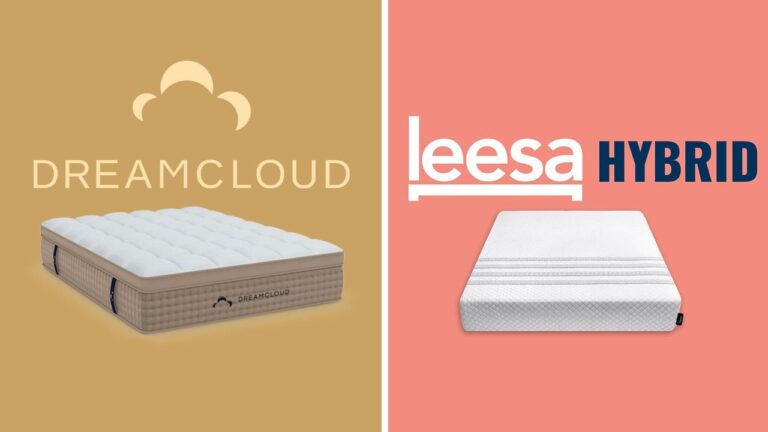 Looking for a bed in a box mattress that uses both coils and foam? DreamCloud and Leesa Sapira Hybrid are both popular options

We know you have a ton of online mattress options out there, which is why we put together these helpful guides to help you navigate through all the pandemonium. In this comparison, we’ll be covering the DreamCloud vs Sapira (now "Leesa Hybrid") debate to figure out which is the best mattress for you.

Before we get into the meat and potatoes, here’s the main differences we’ll be touching when discussing Sapira (which is now named Leesa Hybrid) and DreamCloud:

Now that you’re all filled in on the main points, read through this post for more details.

When bed-in-a-box mattresses began to gain traction among consumers, some folks were hesitant because they figured a mattress couldn’t be that good if they come delivered to you in a box. How are you even supposed to fit a mattress inside of a box? We’re here to assure you that bed-in-a-box mattresses wouldn’t be as popular as they are if they didn’t exceed people’s expectations.

DreamCloud and Leesa Hybrid are crowd favorites for different reasons, which we’ll go over in this post. The Leesa Hybrid mattress is made by Leesa, who was one of the main brands to make the online mattress trend popular. With every 10 mattresses sold, they donate one to someone in need—and as one of the top five online mattress brands, they sell a lot of beds. They’ll also plant one tree for every mattress sold, so they’re one of the more environmentally conscious brands out there.

With DreamCloud on the other hand, you get a premium hybrid mattress that many people seem to love, for a price that you’ll really love. It’s a little newer, so the brand isn’t as popular as Leesa, but that isn’t to say they aren’t an incredibly strong competitor.

Price is the first thing we’ll be discussing in this post because it’s often a major factor in someone’s purchase decision. Comparing prices, the queen size DreamCloud mattress retails for about $1,400, while the Leesa Hybrid mattress goes for around $1,700.

Both DreamCloud and Leesa like to offer discounts though. Leesa typically offers 10-15% off their beds, while DreamCloud usually offers a $200 discount. Check the table at the top of the post to see the current promotions each company is offering in real time.

When we say a mattress is a hybrid, we don’t mean it’s half electric. We mean it uses a combination of foam in addition to springs/coils in its construction. For the record, both beds in this comparison fall into the hybrid category. Let’s talk about DreamCloud specifically for now, though. The bed is whopping 15” thick, which is obviously a little more than the standard 10-11” we see with most bed-in-a-box brands.

Starting from the bottom, you have a layer of dense support foam to act as the foundation for the mattress. Next, a system of 8″ pocketed coils provide additional support and resistance for the pressure your body exerts. The third layer is a transition foam followed by a layer of gel memory foam, which provides an element of deep pressure relief for sleepers. Next is a 1.5″ quilted euro top, which is comprised of two different comfort foams. Finally, wrapping the bed and pillow top is a soft, polyester/cashmere blend cover.

As far as firmness, we give the DreamCloud (and Leesa Hybrid) mattress a medium to medium-firm rating. At the end of the day, the bed strikes a healthy balance between support and comfort. As such, we’d recommend the bed to all types of sleepers. Back and stomach sleepers receive the necessary support yet side sleepers still get a good amount pressure relief for their hips and shoulders.

Lastly, it’s important to note that we think both DreamCloud and the Leesa Hybrid are solid options for people of all shapes and sizes, including heavier folks who weigh more than 250 pounds. We feel comfortable saying this because both beds incorporate coils, which generally speaking, are more durable and supportive than the dense support foams all-foam beds like GhostBed, Casper and Puffy use.

The Leesa Hybrid is a little thinner than the DreamCloud mattress. The bed is comprised of five different layers and totals 11″ thick. Below is a torn open Leesa Hybrid mattress (you should not do this).

The base is 1” of dense support foam and above that is 6” pocketed coils for durability and extra support. Next, is another 1” of support foam. The fourth layer from the bottom is 1.5” of memory foam for pressure relief and then the top layer you’ll be laying directly on top of is 1.5” of aerated “Premium Foam,” a proprietary foam which is basically mattress jargon for soft neutral foam.

Although the Leesa Hybrid mattress contains memory foam, since the layer you’ll be sleeping on top of is a neutral foam, you don’t really get that memory foam feel.

We describe the feel as being soft with a bounce factor to it. With that being said, it’s rated between a medium and a medium-firm on our scale, so it’s not sink-into-the-bed soft. Overall, it’s a hair firmer than DreamCloud so we’d give it the edge when it comes to back and stomach sleepers. It’s still a viable option for side sleepers, especially if you’re on the larger side.

With that said, if you spend a lot of time on your side, we’d probably give the nod to DreamCloud. At the end of the day, the DreamCloud mattress is just a bit more forgiving and provides a little more pressure relief.

We aren’t here to crown an overall winner—we’re like opinion talk radio in that we give you the facts (and some of our opinions), and let you decide what you think will be best for you.

To read more on a specific bed either DreamCloud or Sapira (Leesa Hybrid), head over to their full-length reviews via the “See Full Review” links above.

Company Policies For Leesa and DreamCloud

Since you’re not able to feel, touch, or smell (if you’re into that) any of these mattresses in person, it’s a standard amongst online mattress companies to offer a few policies that help ease your uncertainty.

Both DreamCloud and Leesa Hybrid will give you free shipping so you don’t have to fork out extra cash to get the bed to your home. When it arrives after a week or so, your DreamCloud will be secured in plastic wrap, and the Leesa Hybrid will be in a box about four feet tall. Either way, they won’t look like a mattress when you first open it up. We assure you, though, you didn’t accidentally purchase a floor mat. You’ll just want to let the mattress sit out for about 24-48 hours to let it fully inflate. You can also choose to pay a little extra with DreamCloud and Leesa to have a professional set up your mattress for you after they deliver it, so buying a bed has never been easier.

To take the risk out of buying a mattress online, they offer a risk-free trial period so you can sleep on your mattress for a while before you have to make a final decision. The difference is that DreamCloud offers a full year, while you’ll get 100 nights to test out a Leesa Hybrid mattress. By the end of the trial you have the option to keep your mattress (most people do), or you can return it for 100% of your money back. You can check out the steps of their return processes, and any additional information you want to know on DreamCloud’s website or the Leesa Hybrid section of Leesa’s website.

If you’re a shopper who values a long warranty, you might find DreamCloud’s policy a little more appealing than Leesa’s. With DreamCloud, you’ll get an “everlong warranty,” meaning the company will have you covered the entire time you own your mattress. So whether you decide to get rid of your mattress in five years or 25 years (Please don’t actually wait 25 years—we’re just trying to make a point), the warranty will hopefully hold up the entire time you sleep on it.

Where They Tie: Considerations For Couples

Since we’ve discussed most of the important topics, we want to note the things couples should know when they’re comparing DreamCloud and Leesa Hybrid. The two things you want to look for when you’re sharing a bed with a loved one is how well a mattress isolates motion, and if it has good edge support.

When a bed isolates motion well, you’ll be able to sneak off for a midnight snack without waking your partner, which ultimately means more chocolate for you, right? Both of these beds are pretty good at isolating movement for hybrid mattresses.

So what about edge support? Having good edge support means a mattress doesn’t heavily compress on the sides when you apply pressure, like how you’d imagine it would with a foam mattress. This is beneficial for folks who have a partner that likes to hog the bed and push you into the corner. We commend you for being such a good sport, and you can have the comfort of knowing you probably won’t feel like you’ll slip off the bed at any moment with either of these mattresses.

So if your bed is satisfactory in both categories, which one is best for you? That depends on your and your partner’s sleeper types. Let’s say you’re a stomach sleeper and your partner is a side sleeper. You’ll want something in between soft and firm so both of you can feel comfortable.