Leesa and Nest Alexander are two of the most highly regarded mattresses online. Both are bed in a box mattresses that ship for free, but beyond that, they do not have a heck of a lot in common. As such, in this review, we will pick through the important differences between the two beds to find a conclusive winner, if possible.

Before we investigate the reasons why you should buy one bed over the other, here’s a short summary of the main points.

That’s just a few quick points, but of course we have a hefty post below that goes into even more detail about how Nest Alexander and Leesa compare.

Leesa is a mass-market foam mattress that’s tremendously popular and competes directly with Nectar, Casper, and several others. It’s designed and marketed to reach as many consumers as possible, which goes a long way in explaining why they selected a particular firmness level, construction, and price point. Keep in mind that Leesa also offers the Leesa Hybrid mattress, which has coils and is firmer and more expensive than the standard Leesa mattress.

Nest Bedding is positioned as a luxury mattress brand that makes several different types of beds, including latex mattresses, coil beds, and those with natural and organic materials. Nest isn’t particularly interested in racing to the bottom in terms of pricing, but their beds are still extremely affordable, all things considered (e.g. lifetime warranty, premium construction, made in USA, etc.). For the record, another bed that’s somewhat close to Leesa in terms of price and design is Nest Bedding Love & Sleep. 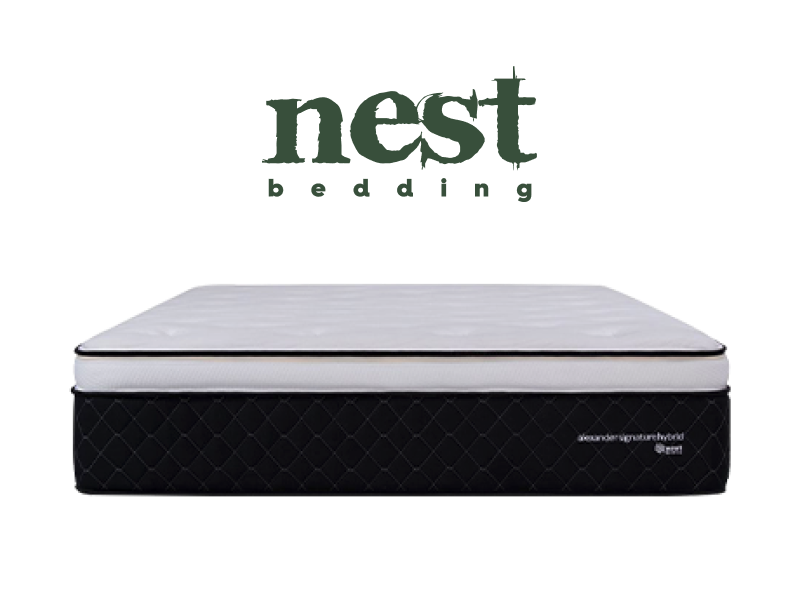 Why it’s Great
Nest Alexander Hybrid is a pillow top mattress that comes in multiple firmness options and is backed by a lifetime warranty.
Best for
If you want a pillow top mattress
All sleeping positions
People that want a luxurious mattress (even comes with a lifetime warranty)
Sleep Positions
Back, Side and Stomach
Product Details
Firmness
All
Type
Pillow Top
Temp
Neutral
Free Shipping
and returns
Trial Period
100 Nights
Warranty
Lifetime
Made in
USA

15% Off Applied In Cart
Shop Now

A Hybrid Mattress With A Pillow Top

Let’s take a look inside the Nest Alexander Hybrid mattress, which will shed light on how it feels and why it feels that way. The first layer is extra-dense foam to support the rest of the mattress. The main support system of the bed, however, is the layer of 8″ pocketed coils. A quick word about pocketed coils—they offer support, durability, and bounce, but with the advantage of more efficiently reducing motion transfer, as compared to traditional innersprings.

As you transition up, Nest Alexander Hybrid has various types of foam. For starters, you have more poly foam (purely so that you don’t feel the coils), Energex™ Foam, and a tinge of memory foam. The real star of the show, however, is the quilted, soft, fluffy, and textured cover—it’s one of the nicest covers on any mattress.

Keep in mind that the exact design of the bed will differ based on the firmness level you select, but the general outline of the construction still goes foam, coils, foam, pillow top.

One thing that differentiates Nest Alexander Hybrid from Leesa, and many other beds, is the fact that you have 3+ options in terms of firmness levels. I say “3+” because you can actually get a split model that has a different firmness level on either side—great for couples!

As you can see in the graphic we created above, the Plush model is extra soft, and really is only ideal for lightweight side sleepers. The Medium option is the most popular, but still skews softer and is a wonderful solution for side sleepers. The Luxury Firm is not too firm, but definitely is the most ideal bed of the three for stomach and back sleepers.

With Leesa, you have technically two options for firmness, but not with the same mattress. We will explain more in the Leesa section below.

Because Leesa is a foam bed and Nest Alexander Hybrid has support coils (8″ coils, no less), Nest is our preferred mattress for heavy and obese people. We’ve been consistent in only recommending that heavy people should first try coil beds—or, in some cases, extra thick foam beds. If you’re over ~230 lb, we’d say that Nest gets the edge over Leesa.

Keep in mind, however, that Leesa has the hybrid option too, but you’ll pay a premium for it. It is a very nice bed though.

Both Are Affordable, But Leesa Is The Most Affordable

As much as we think the Nest Alexander Hybrid is a great value, there’s no denying that Leesa is offered at a really nice price point, before and after discounts. For example, a queen size Leesa mattress retails for somewhere around $1,100, but with their typical promotions you’ll be paying closer to $950-$1,000 for the bed.

Nest Alexander Hybrid has an MSRP of $1,600, and we typically see the after-discount price of about $1,400. So, clearly, there is a difference between the prices of the two products, but with something as important as a mattress, you probably do not want to base your entire decision on price. That’s just our two cents. Both are nice mattresses, and a good value, but they’re not exactly neck and neck on price.

As a heads up, you can always check our Mattress Deals and Coupons page to see current discounts on Leesa, Nest Bedding, and dozens of other brands.

Leesa Is Neutral And Comfortable

While we would characterize Nest Alexander Hybrid as a “pillow top” type feel, Leesa feels like a 10″ slab of general soft foam. It’s comfy, but it will not feel like a pillow top mattress. Leesa is the type of mattress that almost everyone will agree is comfortable and worthy of putting in their bedroom. It might satiate everything you’re looking for, but it’s going to check plenty of boxes.

As you can see, Leesa is comprised of three layers of foam, starting with dense poly foam and transitioning up to a basic memory foam and a proprietary foam called “LSA 200.” Leesa also doesn’t shy away from the fact that the bed has memory foam, primarily because you can’t really feel it—they use it chiefly for pressure relief. But memory foam is not the star of the show. That designation is reserved for the LSA 200 foam, which we love.

Leesa measures in at 10″ thick just like Bear, Casper, and most other online beds. As we discussed above, Leesa is therefore best for individuals weighing under around 230-250 lbs. And, for most people in the 150-230 lbs range the bed should feel like a proper medium on the soft/firm scale.

We contend that Leesa will be ok for all sleeping positions, though, it’s not exactly firm, nor soft. Remember, it’s somewhere in between and that’s both a strength and weakness for the bed. It’s positive in the sense that it means Leesa is a suitable bed for a large number of people, but it’s negative in the sense that people in special situations might not like it.

Of course there’s more to know about both beds, but that’s the reason we’ve posted individual reviews on our Mattress Reviews page. Make sure to check those out, alongside the dozens of other pieces of content we’ve published on the site.

One of the biggest things that goes overlooked when shopping for a mattress is the suite of policies that accompany a particular bed. With Nest Bedding and Leesa, fortunately, those policies are quite consumer friendly. For example, both brands offer free shipping, 100% free returns, and a 100-night test window. What that translates into is a risk-free experience for consumers because if you don’t like the bed you can return it without incurring any fees or costs. It’s a bit like Costco or REI, but for mattresses—hard to get mad at that. Just for fun, though, let’s breakdown each of those policy items.

With regard to free shipping, FedEx is the preferred distributor for most of these companies. Typically the beds are at your house without 4-7 business days of placing your order. While both brands have white glove delivery options in certain cases, the vast majority of consumers end up opting for standard bed-in-a-box delivery (i.e. FedEx).

Once you get the beds, your trial period begins. Again, you have 100 nights with Leesa and Nest Bedding to give it a thumbs up or down. We’ve seen some companies offer full-year trial windows, but that seems excessive—three months is the norm, and should be more than long enough.

If you do decide that returning the bed is the route that you want to go, returns are truly free. No need to bring the mattress anywhere or lobby customer service. They get so few returns that they can still make money and handle whatever returns they receive. We tend to think that it reflects confidence to offer a free return option.

The last policy that goes overlooked is the warranty, which you should read because they spell out everything, including what is covered, for whom it is covered, and suitable foundations for the bed. Both beds will work with virtually any foundation that is solid and has little or no give. Again, however, you should read the warranties on the brands respective websites. Leesa has a 10 year warranty and Nest Bedding, a lifetime warranty!